Are you sure want to change status for revision?

Measurement is a vital part of continuous improvement. After all, only those processes that can be measured can be managed. Only those processes that can be managed can be improved. But manual measurement is time costly and prone to error. So, who did we get to continue from there? Stay with me as I discuss how we solved the problems of a Biodiesel Plant with the utilization of Internet of Things (IOT) and SCADA software we developed N-XPERT EON.

As system developers from the IOT Team, we utilized the latest technology to solve modern problems or improve processes. One such example was the usage of interconnectivity of devices to automate the receiving of delivering raw material in a Biodiesel Diesel Plant. The Plant migrated from paper to automation utilizing tablets and internet of things to speed up the Receiving of Raw materials as well as improved the accuracy and correctness of data. It is through correct data that the company can choose the best decisions to take.

The Plant being their main product was flammable fluid, careful study was made to create a system appropriately cut - out for their need. Environmental safety as well as the safety of the people working with the Plant was thoroughly studied. One of the hurdles of developing such a system is the calculation of the remaining volume of raw material in this case Methanol (C11H10) in its storage tank. Methanol is a light, volatile, colorless, flammable liquid with a distinctive alcoholic odor. The National Fire Protection Association’s fire diamond, it identified methanol’s flammability (Red) as3 in which Liquids and solids (including finely divided suspended solids) that can be ignited under almost all ambient temperature conditions. Liquids having a flash point below 22.8 °C (73 °F) and having a boiling point at or above 37.8 °C (100 °F) or having a flash point between 22.8 and 37.8 °C (73 and 100 °F). It’s Instability – reactivity (Yellow) is0in which is normally stable, even under fire exposure conditions, and is not reactive with water (e.g., helium, N2).

The flash point of a volatile material is the lowest temperature at which its vapors ignite if given an ignition source.

Since it is flammable, we limit the contact with the fluid especially with electronic devices so as not to pose a hazard. Even placing electronics on top of the tank without contact to the liquid methanol is still in danger of ignition due to the methanol vapor at the top of the tank. This is if a spark is produced by the electronics by short circuits or arcs.

Based from International Program On Chemical Safety Guide No. 105, electronics used to maintain a methanol tank should be explosive proof (http://www.inchem.org/documents/hsg/hsg/v105hsg.htm#SectionNumber:1.1,2020 ). Since stored methanol must not be subjected to air pressure, choice of electronic Ingress Protection level (IP) was also carefully studied as to not expose the electronics from methanol vapor and not allow air to enter the storage tank which contains oxygen gas. IP ratings are defined in international standard EN 60529 (British BS EN 60529:1992, European IEC 60509:1989) which are used to define levels of sealing effectiveness of electrical enclosures against intrusion from foreign bodies (tools, dirt etc.) and moisture. Additional safety measures also is the use of inert gas to balance the pressure inside and outside the storage tank which doesn’t react to methanol.

Upon thorough study of the problem at hand, we all found the answer in Mother Nature. The brilliance of nature is like she already has the solutions to all of our problems. The idea we came up with was the usage of echolocation to measure distance of an object. Echolocation is used by Bats and Whales to determine the proximity of an object using sound reflection. 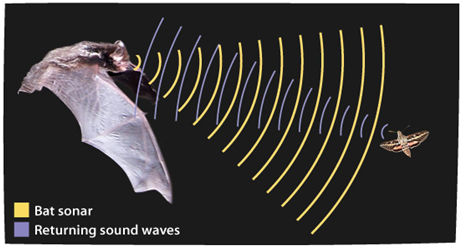 The faster it took for transmitted sound to return to the receiver, the nearer is the object it hit.
The technique of using echolocation can only be used if we can imitate how bats or whales and dolphins do it. We must have a device with the same sensory function of those that they have. In which case, we utilized an ultrasonic sensor.
An ultrasonic sonic sensor is a device that transmits sound from its transmitter. You have already known that it is the nature of sound for some portion of it to be reflected when hitting a surface. The denser the object it hit the larger the amount of sound is being reflected. The transmitted sound once reflected is received by the ultrasonic sensor’s receiver. So, how does distance of an object be known from this detail?

You also know that sound cannot travel in a vacuum. In air however, it travels at 355 m/s at 40°C.To determine the distance of an object, the sensor records how long it took for the transmitted sound to return.

Given that Distance=speed ×time, if we have time (how long it took for sound to return) times the speed of sound (this case 355 m/s), we have the distance. Note that sound has to travel back and forth.

To determine the distance of the object that is one-way trip of sound, computed distance must be divided by two.

Let’s say the time it took for time to return is after 750μs. From the formula Distance = speed X time:

We need to divide it by 2 to get the 1-way trip distance.

For reading data from the sensor, we utilized a Programmable Logic Controller (PLC). Data transmission is done via RS-485 bus. This is because RS-485 lines are capable of long-distance communication and is a multi-drop.

NXPERT EON read the data from PLC and give users of the data in presentable ways like numerical values and fluid height in the tank. A user utilizes a tablet to monitor the status of the tank thus it can be carried around by operators and engineers.

In NXPERT EON, we utilized Internet of Things for the communication among the sensors and other devices. By this method, status of the Plant can be determined remotely via Internet.

With the method mentioned, we provided the Biodiesel Diesel Plant a method to read the volume of their tank without contact with its flammable content as well as even if their fluid is colorless avoiding hazards.